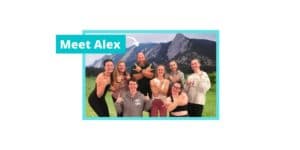 In May of 2019, Boulder, Colorado native Alex Krasnick took himself out for tacos. (Haven’t we all had that taco craving?). Little did Alex know that a chance meeting would lead to him learning the amazing health benefits of power yoga workouts.

While hanging out at a local Mexican restaurant, he met Sarah Woodward, the manager of our Boulder studio who also leads yoga classes there. He didn’t know it then, but his life was about to completely change… and not only because he was on the verge of discovering a brand new way to improve his life – power yoga workouts.

Today, he calls that meeting with Sarah a “total serendipitous coincidence.”

The evening of the fateful introduction over tacos, Alex just so happened to be taking a night off from a physically intensive wilderness first responder course. He was only allowed one evening off, so the stars really must have been aligned! Alex had been considering taking the first responder course for a long time, but it was the loss of his father that finally motivated him to go for it.

Alex may have expected the wilderness program to be a major turning point for him, but it was his night off that really changed the course of things. (Isn’t life weird that way?)

Sarah and Alex started talking over their tacos. One topic of conversation was yoga. Alex told Sarah — again, a brand new acquaintance — that he’d been thinking of taking some beginner yoga classes. He was seeking new exercise options that would fit his unique physical needs after five intense shoulder and back surgeries. He’d heard the rumors that power yoga workouts could be a full body workout with strength-training and pain management upsides. Like many Coloradoans, Alex loves getting outside and being active on ski slopes and hiking trails… but he still felt something was missing in his fitness regimen.

It’s a good thing he went out for tacos that night… because he was about to figure out what that missing piece was… Yoga. 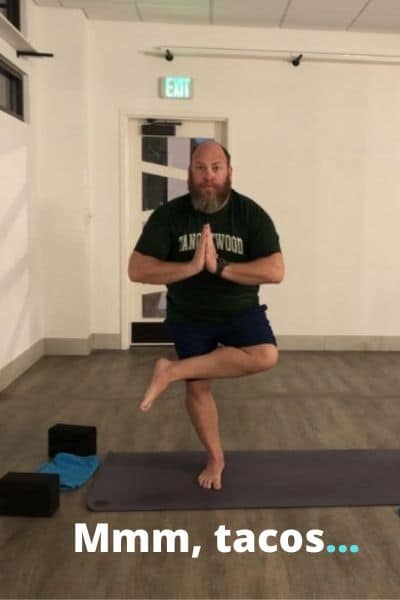 Power yoga is a terrific way to stretch, strengthen AND build your cardio

Three weeks after meeting Sarah and getting her card, Alex sent her an email and said he was ready to get started. While he was confident that a power yoga workout could be just the thing he needed, he wasn’t totally confident heading into his first round of classes. And he’s not afraid to be honest about his number-one fear.

“My biggest concern through my first twelve classes was farting in class,” Alex remembers. “I’m not joking. There were days I ate nothing but soft pretzels and Saltine crackers to keep the gas out of my system.”

Even with those misgivings, it wasn’t long before Alex could tell that he’d found his tribe with Bulldog. Class leaders pushed him out of his comfort zone on the mat without making him feel like he wasn’t being supported. Early on, he was concerned about his “big guy” stature and lack of flexibility and how it might affect his ability to keep up with the class. Class leaders offered suggested modifications, straps, and positive affirmations to help him stay on track and he was able to set those insecurities aside.

“Those first few classes were rough,” Alex recalls. “I had to walk out of class a couple of times because it was so hot I couldn’t keep up with it. But it started flowing and I was there five nights a week for several consecutive months.”

As Alex became more confident doing Bulldog’s power yoga workouts, he also fell into friendships with the community. His yoga pals were ready and waiting to celebrate his one-hundredth class with him earlier this year in a heavy metal-infused flow set to Alex’s very own playlist. (His favorite band is TOOL.)

Bulldog workouts have, in fact, helped Alex reach his goals of increased flexibility, improved conditioning for other activities, better sleep, pain management, and more. The pain management factor, in particular, has been a major game-changer. Before taking on challenging full body yoga workouts on the mat, Alex would often find himself taking maximum daily doses of Tylenol or Advil in order to get through the day. No more! 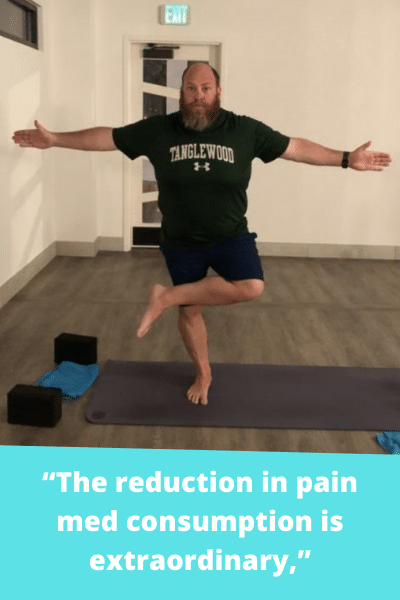 “The reduction in pain med consumption is extraordinary,” Alex says, who knows that chronic pain will still always be part of his life because of his many surgeries.

He’s even found yoga to be a useful way to manage pain from acute injuries on the ski slopes! After one recent bad fall, Alex went to class, rating his pain level at an eight and a half on a scale of one to ten. After pushing through a full body workout, the pain level was down to a four and had shifted from his leg to his back, where he could more easily manage it.

Alex’s growing mastery of yoga is proof that you can get into a yoga practice no matter where you are, even without access to a mirror-lined studio. Fun fact: he’s never looked in the mirror once in class.

“Everything I’ve done in terms of getting better at yoga has been entirely in my head,” Alex says. “I’ve evolved and I’m doing things now pose-wise that I’ve nailed. I’ve never looked in the mirror.”

(The lesson here? Stop using the lack of an ~official studio space~ as an excuse for not taking a beginner yoga class! You can start and improve a yoga practice anywhere — including at home with online classes.)

How yoga changed his body

Alex now says he feels more flexible than he has at any other point in his life. He even explained that he was very surprised by the strength he gained after starting to regularly work a yoga routine into his life.

The physical benefits have been huge, but Alex is also grateful for the community he’s gained as part of the bulldog family. The network of bulldoggers — both online and through social media — is growing… and generally awesome. 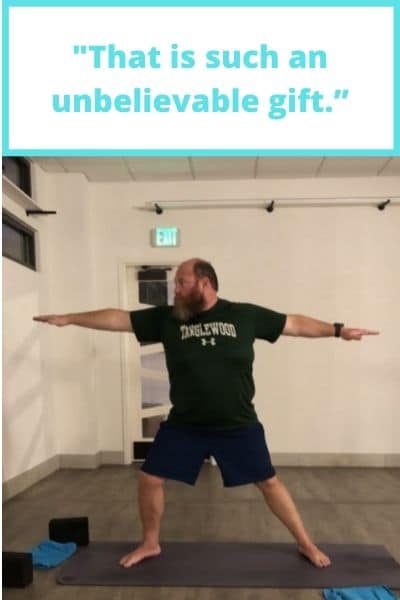 “As bad of a day as I occasionally have, I know that when I get my Bulldog Yoga workout in for that one hour, I am 100 percent in a community of people who show me nothing but love,” Alex says. “And that is such an unbelievable gift.”

In the not-so-distant future, Alex plans to give himself another unbelievable gift: his two-hundredth power yoga workout class. That’s a whopping two hundred power yoga workouts on the mat — each one of which has brought him a step closer to his health and wellness goals.

We celebrate your story with you, Alex. Now, keep on getting in those power yoga workouts.

And you can still do them online at home.

Want to see some power yoga workouts for yourself?

After the trial it's just $12.99/month for unlimited yoga class streaming. Memberships auto-renew each month & you can cancel anytime.

Alli is a seasoned writer on many topics, including yoga and health and wellness.