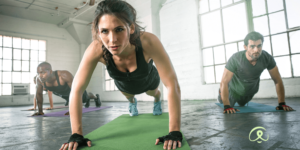 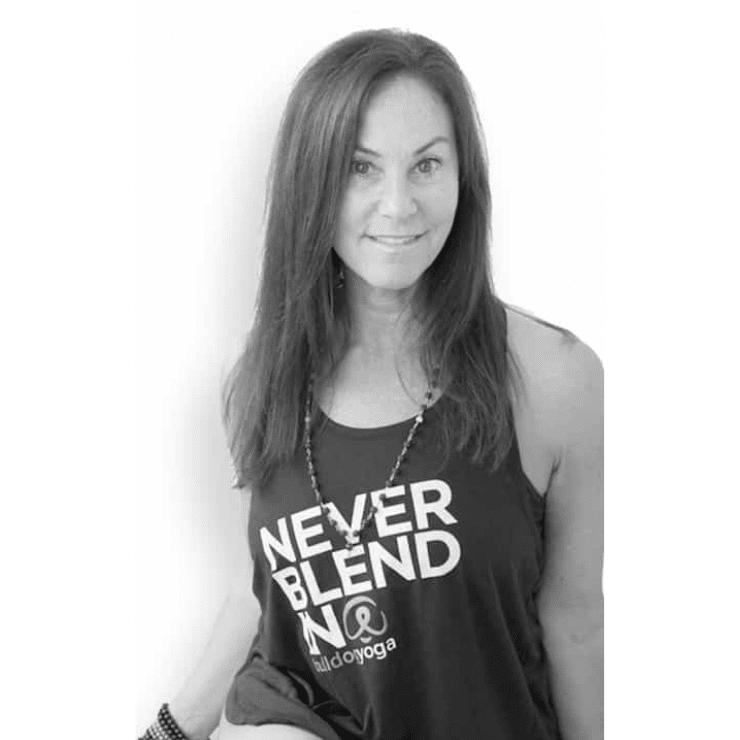 *Spoiler Alert* Yes, power yoga just might be the BEST bodyweight exercise you can do!

Wading through the options of bodyweight exercises

In the years I’ve spent in the wellness industry, I’ve talked to a lot of people who are in search of the “best” exercise… like, the best ever. And I get it! We all want to take care of ourselves. We want to give our bodies the very best movement practices possible so that we can reap the maximum health benefits. That way, we can pass our best on to our work, the people we love, and everything else we have going on in life.

It’s true. Everyone wants “the best.”

Here’s the thing: while my experience with yoga has proven to me that a yoga practice really can be the best workout option for plenty of people, it’s important to remember that everyone’s body responds differently to different fitness regimens. It’s always a good idea to check with a doctor or other health expert before you start a new workout routine, even if you feel like that routine is bound to be the best thing you’ve ever tried.

Still, I feel extremely confident in recommending power yoga as one of the very best bodyweight exercises in the game.

And I’m excited to tell you why!

What is power yoga?

If you’re new to the world of yoga (and, more specifically, to power yoga) you might be feeling a little confused as to how it can be classified as a bodyweight exercise. Frequently, yoga is depicted in the media as primarily an exercise in mindfulness, with lots of chanting and candles and ohms.

Yoga definitely integrates these elements — and I’m a big fan of using them when I’m on the mat. However, there are certain practices that emphasize mindfulness more than others.

On the other end of the spectrum is power yoga, which is more concerned with the physical body than with the spiritual benefits of yoga. According to Healthline, power yoga is a fast-paced and intense activity that emphasizes the flow from one pose to the next, rather than a single pose at a time. In other yoga practices, poses might be more disconnected. The classes we offer in our online library lean toward the power yoga style, though we do have a collection of meditation classes, as well.

But don’t get it twisted! While power yoga is more aerobic in nature than other types of yoga, it still requires plenty of mindfulness and a focus on breathing. In the process of moving between poses, it’s important to stay in control of your breath. Still, adding a little extra power to your yoga brings a slew of additional health and fitness benefits to your time on the mat.

Find out more about power yoga with our YouTube video below! 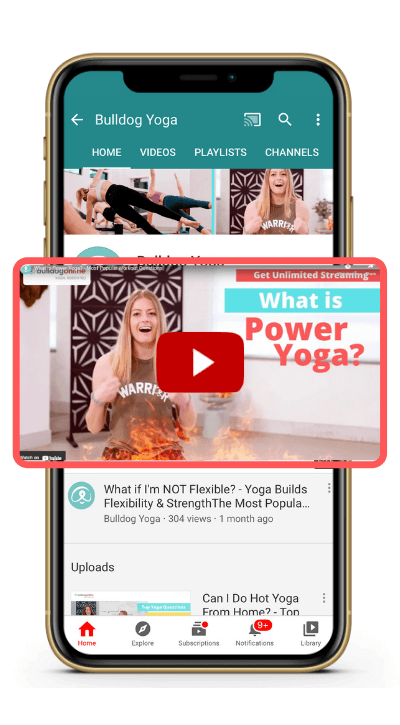 Power yoga is a bodyweight exercise because it relies on you supporting your own bodyweight in various poses, often holding those poses for extended periods of time. You’ll also need to support your bodyweight in the transition from one pose to the next. In the process, you’ll build lean muscle… without the need for additional weights or gym equipment.

Bodyweight exercises allow you to build leaner muscle than exercises that require heavier weights, which is one of the biggest benefits of steering clear of the dumbbells. You won’t be able to build as much mass as you do when lifting heavier equipment, but your muscle tone will be spot on.

Bodyweight exercises also empower you to be more mobile with your fitness, since you don’t need any additional equipment to get them done. And since you won’t need to learn to use that additional equipment — which is, after all, always subject to user error! — you eliminate many potential workout injuries when you stick to your bodyweight alone. As long as you have the guidance of a knowledgeable teacher (like our fabulous bulldog leaders), a bodyweight exercise like power yoga is less likely to end in you getting hurt.

The benefits of power yoga as a bodyweight exercise

As I mentioned before, everyone has their own “best” fitness routine — but I do believe that with power yoga, you can get the best possible combination of physical power, strength, and flexibility of any other workout out there.

Your body will respond to yoga’s emphasis on breath

Unlike the other bodyweight exercises , power yoga will force you to practice breathing techniques that will regulate your body. In turn, this will leave you feeling more centered than when you started. Even without the chanting and oh-ming, power yoga has the power (get it?) to calm your mind.

One of the things I love most about our bulldog online classes is that they really require you to focus on what your body is doing. Unlike other yoga classes, we don’t let you just hang out in one pose for fifteen seconds and relax. You will really need to pay attention to your movement and breathe along with as you go. This builds a connection between the mind and body that’s harder to come by in comparable workouts.

In my experience, people come to power yoga looking for a great physical workout… which they always get! But they also walk away feeling more tranquil and focused in other areas of their lives, which you’re not going to find in other bodyweight exercises.   In fact, yoga has proven mental health benefits AND great sleep benefits!!! 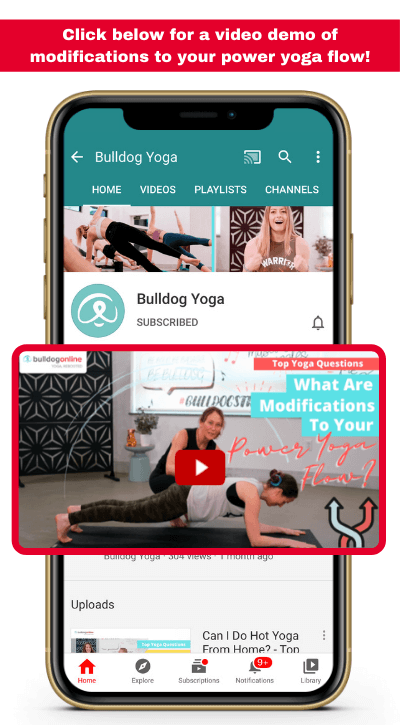 Another major perk, power yoga doesn’t require additional heavy weights or equipment. Win!  A bodyweight exercise like power yoga will make you less prone to injury than other forms of weight training. But wait, there’s more! When practiced properly and with the guidance of an experienced class leader, yoga can actually help you heal pre-existing injuries.

For example, according to Veritas Health, yoga has been proven to reduce the painful symptoms of back injuries by stretching, strengthening, and improving posture in the lower back. Yoga is also known to be healing for knee pain and neck pain.

Can you say that about other bodyweight or weight training exercises? Didn’t think so!

You can also take advantage of power yoga’s cardiac benefits

Because of power yoga’s faster pace, it gets the heart pumpin’ and the sweat flowin’. As a result, there are additional benefits added to the ones you would get from other bodyweight exercises.

Per the Mayo Clinic, here are a few of the most important benefits of cardio workouts like power yoga:

If cardiac health is especially important to you, you can even check out this cardio yoga workout plan.

Plus, power yoga tends to help you work up a sweat. Sweat means your body has a chance to release lots of toxins. BONUS! Yet another bonus of power yoga and cardio … a stronger core! According to Parade, yoga is one of the best core-strengthening exercises.

It will kick your parasympathetic nervous system into gear

So we know now know the mental components of power yoga – what else? Calling all science buffs! The role of the parasympathetic nervous system is especially interesting when it come to the benefits of power yoga. This really sets power yoga apart as a bodyweight exercise.

Even though a power yoga class doesn’t feel especially relaxing — and it won’t! — you still stand to benefit from the engagement of the parasympathetic nervous system once your workout is over. This makes power yoga one of the most dynamic bodyweight exercises you can find.

Or, take the quiz and find the perfect workout plan designed specifically for you!

After the trial it's just $12.99/month for unlimited yoga class streaming. Memberships auto-renew each month & you can cancel anytime.

Allison Sobel has devoted over 30 years to the yoga and health and wellness industry. Allison is an E-RYT 500, YACEP® instructor certified through Yoga Alliance and a Chopra Center-certified Primordial Sound Meditation instructor. She additionally holds over 10 years of experience leading her own YTT, and she leads the annual 200-hour Yoga Teacher Training at Pure Energy Studio (Paoli, PA) and yoga & meditation retreats at the Sansara Resort in Panama.

When not at home with her husband, three daughters and 4.5-lb. morkie dog, Crystal, Allison leads retreats around the globe (previous destinations include Panama, Iceland, Costa Rica and Mexico).

Allison specializes in many styles of yoga, including Hatha, Alignment, Vinyasa and Restorative. She has presented at the Kripalu Center for Yoga & Health in 2017, Esalen (Big Sur, CA) in 2017,One Love Fest (Ojai, CA) in 2016, NamasDay Festival (Philadelphia, PA) in 2013 and 2014. She served as staff faculty at the Omega Institute in 2015 and 2016. She additionally has been interviewed by Shape Magazine on How to Get Better at Yoga By Taking Your Practice Outdoors.